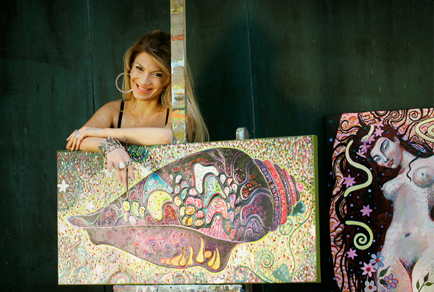 Anna Tananyan is an artist of Armenian descent living in Laren, in the center of Holland. She received her art education at the Academy of Arts in Yerevan, Armenia.

Her powerful artwork contains many classic and mythic themes and some features of traditional symbolism. In her separate paintings the effect of her powerful use of colors changes, but is harmonious and challenging each and every time, sometimes even on the edge of psychedelics. Sometimes they do, therefore, remind us of the flower power movement of the sixties.
However, they also contain many parallels with the romantic works of Symbolist artists of the fin de siècle, such as the Dutch painter Toorop and the Russian born Kandinsky. By the way, she herself said to have been influenced by the Jugendstylartists Gustav Klimt and Antoni Gaudí, which is no surprise once one has seen her work. Her preference for decorative ornaments and symbols seem to have been rooted in her younger years. She used to wove rugs and tapestries and make collages when she was younger. No wonder that the continuous alternation of contrasting colors and patterns have inspired the baroque and decorative aspect that characterizes her work today.

In addition to her paintings, she also makes pen drawings and watercolors, or a combination of those two. Her graphic work is very detailed, colorful, graceful and magical, and clearly inspired by fashion, clothing and jewelry design. More specific, the elegant female figures from the fin-de-siècle, and rich ornamental art and craft patterns from the Caucasus and other ethnic art, such as the Slavic folklore and mythology, French pointillism, Armenian / Mediterranean miniatures, Indonesian batik, Japanese and Egyptian papyri ukiyos do belong to her references. Her graphic work has the expressive, decorative and colorful character very suitable for posters and book illustrations.